My trips to Greece continue to be unpredictable, impossible to plan yet always somehow leave lasting good memories. This time was no exception. It was fun and full of surprises – and I love surprises!

My last visit to Thessaloniki was almost exactly a year ago, when Firewind played at Kaftanzoglio Stadium (July 6, 2011) with Whitesnake and Judas Priest. That was a mix between nightmare and excitement. I quickly realized one thing though, and that’s that Greek people are kind, open and helpful – whether or not they speak English. :)

Back then I was “saved” by Derekenaris, a guy I got to know shortly before visiting the city. When I was stuck in the middle of the night at the staduim, last bus had left and there was a taxi-strike that particular day, he helped me out.

This time I met up with Panagotis from the Greek metal site Metalpaths, which he founded a few years ago. We’ve been in touch since the Firewind-gig in Athens back in January and I’ve written a few pieces for Metalpaths since then as well.
He and two friends of his, picked me up at my hotel around noon and I spent the whole day with them. Had a great time, super nice guys.

After exploring the cafés and food of Thessaloniki (well, at least a a few of them) we went to Mylos in the afternoon. The heat was almost unbearable – especially for me who’s one of those people who always tends to wear black. 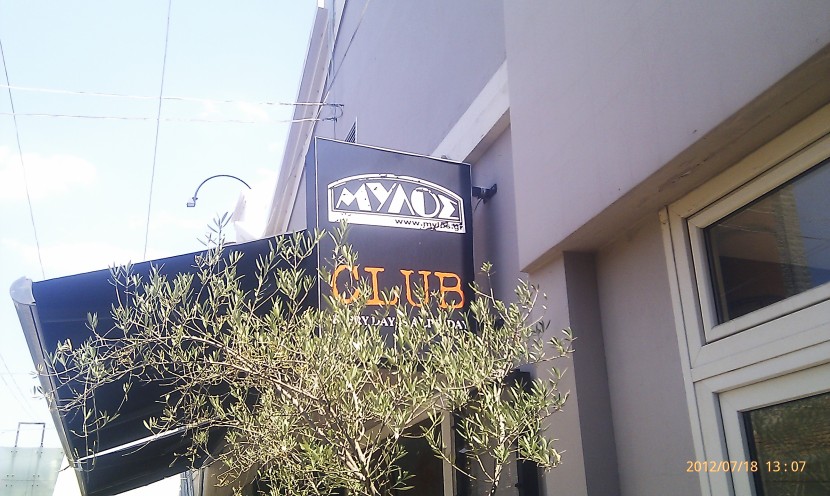 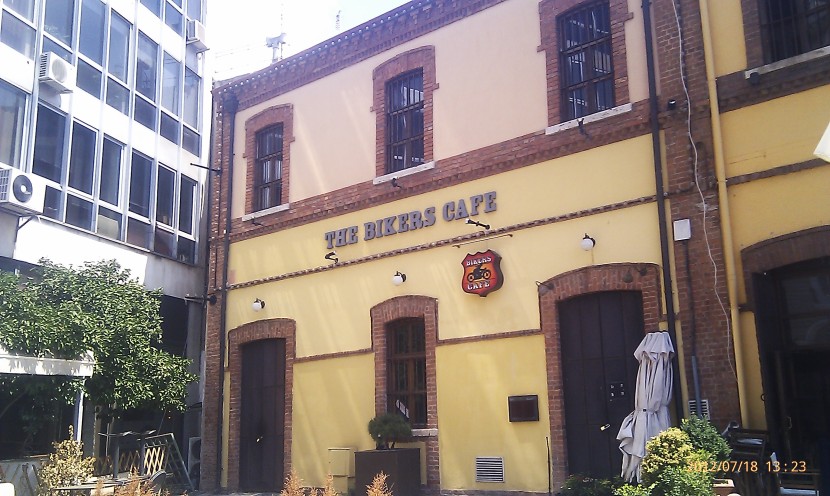 Mylos was an interesting and cool concept – it was in an industrial area which reminded me a bit of Rockhal in Luxemburg. You walk through a gate and there’s an outdoor bar, a club, a nightclub, an exhibition hall and an outdoor concert stage (which was one of the most unique ones I’ve seen!)

The opening acts – 4 bands, were playing indoors. Firewind arrived around 6.30 PM for their sound check. Smart solution, to keep the crowd entertained while waiting for the main act, without having to listen to the usual “one-two-CHECK!“. Liked the setup of the show, with the splitting of opening acts/headliner indoors/outdoors, yet still in the same place.

Panagotis and I were hanging at the main stage doors, Bob (Katsionis) walked over for a chat when he was done with his part of the sound check. Had a chat with Gus as well, but more about that in another blog, later on.

This particular show was about to stick out from most of the Firewind-gigs I’ve seen in the past.
The band was receiving a gold record award from Sweden Rock Magazine for the song “Wall of Sound” and guess who was supposed to present it to them…?

I was freaking out at first when I was asked to present the award. I’m not the one standing on stage every night for a living. But I’ve never been one to back down from a challenge, it’s only a matter of facing and defeating your fears.

I got all the help and support I needed from Gus and Elias before walking up there on Firewind’s stage that evening. Right before it was time (right after they wrapped up “SKG”) Gus was standing behind the stacks laughing at my (probably) terrified face going: “It’s time now!”
My only comment to that was “Shut uppp!” Lol! I was trying to stay cool about the whole deal. Holy lord..!

So I walked out there thinking that nobody cares in a hundred years anyway, even if I do fuck up…! :)

It’s not like it’s the first time I’ve been on a stage – I used to sing in bands and solo back in the day. But I haven’ done it in a long time and most of all, not in front of a major crowd…! But it was a total kick, I’ll admit that. People started cheering before I had even finished my first sentence, there is a good reason why touring musicians get addicted to this stuff!

Looking back, I’m just very honored to have been given the opportunity to turn people’s attention to these guys with the award.

I’ve seen the band a number of times, yet I never get tired of seeing the instrumental acrobatics that they perform. Each and every one in the band is a wizard of his instrument, and when they get together and do their thing – it’s magic.

The place was almost empty ten minutes after the show, people had already left, only a few still lingering, talking, maybe waiting for their rides back home. Talked for a few minutes with Derekenaris, eventhough it was very brief – he had to work the next day, so he left.

Panagotis was cool with the idea to head down to the afterparty. As we were passing through the gates I heard someone shouting: “Goodbye, Daniela!”
I turned around and there was a young boy with a Firewind t-shirt, waving goodbye.

I guess I got my five minutes of fame in Thessaloniki, I suppose that as one of the very few blonde people there, I was easy to recognize and remember. Either way, it was nice.

The afterparty took place at a rock bar called Dizzy Dolls, which I was told has been Gus hangout for years. My guide Panagotis knew where it was, so we drove there straight after the show.

I liked the place, good music, typical dark  rock bar and fairly cheap drinks (compared to Swedish standards at least). The band arrived after a while and were stuck down in the corner surrounded by people – basically it was extremely crowded, you could barely get to the bar.

Drummer Jo got tired of the crowd and wanted to go outside to get some fresh air so I joined him. Sometimes it can get “too much”, so getting five minutes of peace and quiet was a relief.
Apollo joined us, feeling the same way about the crowds inside.

Personally, this is the way I want to communicate with people – in a relaxed environment. I don’t like hanging around tour buses after gigs or pushing and squashing in bars – I like the human interaction so the escape from the bar suited me well. Gus was of course stuck in there, schmoozing, goes with the territory. :)

Panagotis and his friends had to leave, offering me to drop me off at my hotel but I decided to stay for a little while. The outdoor temperature had finally dropped a little so it was more bearable. Apollo grabbed a few chairs so we just sat out there talking about past gigs and coming ones.

Jo and Apollo left to go get something, said they’d be back in just a few. Stayed a few more minutes out there with the tour manager, a nice “british lad” before I felt that maybe it was time to call it a night.

I went back inside, just to let Gus know I was about to split. I got a quick deja vú flashback when I saw the guy surrounded by people – fans, friends, whoever, it was like back in the day when you walked into a room and needed to find Sebastian Bach. All you had to do was look for the CROWD and you’d find the guy in the middle of it all. And sure enough, Gus was in there,somewhere. :-) Managed to work my way in to say I was leaving, a conversation would have been impossible anyway.

I left Thessaloniki with some great memories. I love the people, the food, the city – Greece is definitely a place you want to go back to. If for no other reason, they’ve got some pretty kickass musicians that the country can be proud of!

I will be back.