A colleague, who’s fairly new at work, invited us over for dinner at her place the other night. We were chatting about this and that, then she suddenly asks me if I had “ever” been a groupie.

– Well it just seems like it would be a natural thing, you know, as you’ve been hanging with musicians, rock stars, for so long…? Haven’t you, I mean, you know…ever….?

She didn’t mean it in a judgemental, bad sort of way, she was just sincerely curious.
I wanted to say so many things, I was about to write another blog about it – then realized there already is one from last year on the same topic (https://lita77777.com/rocknroll-women) 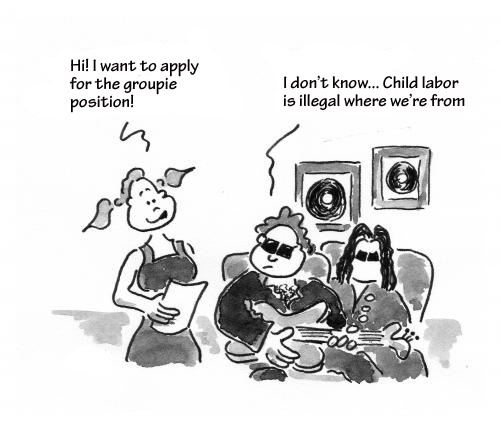 I just felt that I had to explain, to make her understand what I’m about.
Before I even started writing about music, I was a fan like everybody else. Guys who are in bands today – successful or less successful, were the same back in their teens – FANS.
We were all just there for the music – then we went different ways to find our own place in that world. Some became musicians, some TV-hosts, some radio DJ’s, others club owners, record company people, roadies, managers, journalists – and well, some became…groupies,

I’ve just never been able to identify with the role of a groupie. I simply don’t have the personality for it. I’m old-school, the idea of being with some dude that I barely know, just bacause he’s in a band, doesn’t appeal to me at all. That’s one thing.

The second thing is – back in my autograph-collecting days, I looked up to a lot of people, they were on a different level somehow. They were heroes, gods almost. I couldn’t even picture them in a “human” (sexual) situation, as sweaty, huffing and puffing, regular men. I didn’t want that image in my head.
I wanted the larger-than-life image of them, where they were these fantastic sort of men who created music that would live forever, music that touched me, that changed and enriched my life in so many ways.

[David Coverdale was a GOD, a very sexy one, but nevertheless a hero more than some regular dude :)]

I definitely didn’t want to sleep with any of them, god no. That’s not what they were for, the way I looked at it. It was okay for chicks who barely knew WHO they were screwing to do that. As long as it was some guy in a famous band that they could brag about later, they didn’t care.
Never been my thing, never will be.

And it’s strange how I’ve always had to deal with people who just assumed that I was a groupie. Many years ago, I received a very angry e-mail from a legendary guitarist’s wife, who just spewed our her disgust over “people like me”. I read her mail, with eyes as big as plates, then read it again, and dropped my jaw and again….shaking my head. What the f…..??

To this day I don’t know who she took me for, or why she even thought that I had done anything at all with her husband! I met him maybe twice and one of those two times we were in the hotel bar having drinks, laughing, talking, whatever – and it was not “him and me” – it was the whole damn BAND, crew and fans. It wasn’t exactly a date, and definitely not whatever she thought.

I suppose I was just chosen as an easy target because I was visible out there on the web and she was frustrated with her husband’s way of life. From what I heard, they divorced a few months later, but it was probably not a match made in heaven anyway.

Another time I heard rumors, years later, that I had supposedly “been” with the bassplayer of one of the bands I used to hang with. To make the story more believable, there were “details” about when and where. First of all, I’m not the groupie type, so just to hear stories about this “imaginary me” was fascinating.

It was the first time I experienced being a part of a rumor that wasn’t anywhere near anything that had to do with reality. Total fiction. First I was angry, but then I figured I should have been flattered that someone bothered making up those stories in the first place.

Anyway – that story would have been exposed as a complete lie if anyone had ever bothered to check the facts when it started circulating. The bassist in question had been taken to the emergency room that night because of an overdose. It was kept from the press, because the band was “the big thing”, the moneymakers that year, and the label (and everybody in the big machinery surrounding the band), kept the whole thing private. It lever leaked (much to my surprise actually…).

I wouldn’t have said anything even if asked, it wasn’t for me to start blabbing about that. But if somebody else started digging, they might have found out.

I don’t know if my colleague understood what I was saying but I think she did. Groupies are a part of the rock’n’roll lifestyle I suppose, guys would go nuts on the road if there weren’t chicks somewhere who were willing to “put out” along the way. Whatever happens on the road, stays on the road – that sort of thing.

Everybody knows that it’s happening, at least every now and then. But frankly – it happens in an office just as much, it’s just not as interesting to mention. Some bands brag about doing groupies because it makes them heroes among guys who are less “lucky”. Other bands are sticking to their wives and girlfriends – and there are more of them today than there used to be, which I guess proves that even musicians can be decent human beings sometimes. ;))