David Coverdale of Whitesnake started tweeting away on Twitter and I’ve never before seen such sincere joy among his fans, from all over the world. It’s an opportunity to communicate with him in real-time and many who aren’t typical “twitterers” are now writing on Twitter several times a day, probably feeling like kids in a candystore. 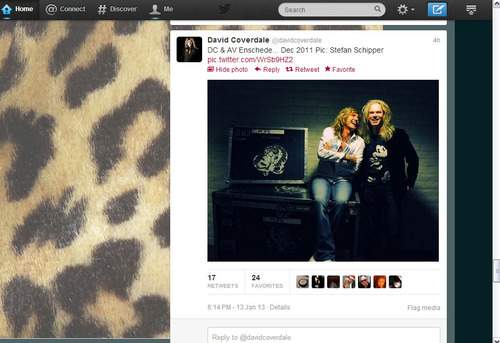 David went out of his way to try to make himself accessible in any way he could when the internet first made its appearance. When I met him back in 2000 in Stockholm, he proudly explained that his first official website was about to launch. Fans like Kino in Japan had held his name alive through their fan-websites, and now they were also a part of the official release.

David has also been active on the message board on the Whitesnake site and participated in video-Q & A-sessions where fans could send in video-questions and hopefully have them answered by David.

It’s just awesome. These are new, different times. I can’t help looking back to when I first discovered Whitesnake. It was just this pop-show on national Swedish radio (there was no commercial radio in Sweden back in the 80’s) that played “Guilty of love” – and it was that simple little drum roll that Cozy did before the last chorus, that made me go and get the “Slide It In”-album. That was 1984.

Back in those days, the only way you could get any info whatsoever about your favorite artists, was through magazines. Hard rock wasn’t exactly endorsed by radio or TV so it was pretty much an underground movement in a way. Huge, but still “underground”.

The point is that rock stars, being as beyond reach as they were, were unreal, likegods almost. You knew they existed but you couldn’t be sure unless you got a chance to see them live in concert. There was no link to them – they were on a different planet and the fans, well, we were like disciples and simply “not worthy”.

Meeting someone like David Coverdale felt just as likely as meeting God. In other words, that idea was just an impossible dream, it just wouldn’t happen.

Maybe that mystery was also what made the rock stars of that era ROCK STARS. They were out of reach, larger than life, moving in circles you would never be invited to, living a life you would never be a part of… Or so I thought when I was sixteen. I wanted it so bad, but I didn’t think it would ever happen. Me, part of the world I loved so much – “for real”?

I wasn’t allowed to go to a Whitesnake concert when I was a teen, cause my parents wouldn’t let me. Without my own money I couldn’t sneak off either.
So the first time I saw Whitesnake live was with the Monsters of Rock package 1990. I was at the Quireboys press conference but I don’t think Whitesnake did any press. Or I just didn’t get the info if they did, I can’t remember. But they were amazing in the Globe, David handled the stage and the crowd like the out-of-this-world performer I always thought of him as.

The first time I met him, was at a press conference at the Midtfyn Festival in Denmark 1993. That, I will never forget. I went there with my friend Lena, also a big fan, and she was supposed to take good photos, whereas I was supposed to record the press conference. When David walked in – I remember that like a slow-motion scene in a movie. It was as if someone pressed a button and the place just went silent, everybody’s eyes were on him. He passed me and I just remember the fresh smell of cologne.

Lena got so shaky that her first pics got all blurry and I, well I was so awestruck that I forgot to turn on the recorder. When I finally did, I just sat there and stared, couldn’t believe that I was there, breathing the same air as my biggest hero. I’ve got only 2 true heroes- Rob Halford and David Coverdale. That’s it. The rest I admire or whatever, but David and Rob are on a totally different level to me.

That whole day feels like a slow-motion dream, including the show later that evening – which was actually why we went to the festival in the first place.

Seven years later, in 2000 – it happened. The impossible. The unthinkable. I was granted an interview with David at Sheraton Hotel in Stockholm, right after the press conference. I cannot explain how nervous I was and how small and insignificant I felt. Once again going back to that whole Wayne’s World “I’m not worthy!”-feeling.

I spent about an hour in that hotel suite, talking with David about everything under the sun – funny things, serious things… anything and everything. To this day I really feel very blessed for getting that opportunity. That was the very last time rock stars were out of reach, so it was a huge deal to me.

Then – with the internet, things changed. You can now get hold of pretty much anyone through Facebook or, in this case, Twitter. Some of that mystery is gone. But people don’t want or need that mystery anymore to appreciate their heroes. They cherish the opportunity to be able to speak to their idols instead – the way they now can follow David on a daily basis as he Tweets out photos from his bedroom window or shares little everyday anecdotes or jokes with us all. He’s among fans and not an unreachable god anymore.

Times they are a’changin’ and the way I see it, it’s definitely for the better…