It’s that time of year again – when it’s time for me to look back on the past 12 months to summarize what I’ve been up to. It’s been a rockin’ year for sure, although it didn’t start out that well.

My year in rock started tucked down in bed at my friend Blackie’s house in Nashville, Tennessee. I had a bad fever and a touch of the flu after visiting another friend in Florida two days before, Kevin from JOP (Jon Oliva’s Pain).

I missed the gig I had planned to go to on New Year’s (Blackie and her bf Ronnie, both from a band called Liquid Courage), but at least I got to see former Savatage-frontman Damond Jinya do his thing with his tribute band Kuzin It in a club before I left.

[Left – Damond with Savatage Right: Blackie, me and the ladies, at the club]

It was a fairly slow concert month in January, as always. I did an interview with Gus G for Sweden Rock in January and I think that was pretty much about it, musicwise. Yes, a VERY slow month.

A week later it continued with ROYAL HUNT taking on the stage. I went cause I love the drummer’s style, Allan Sorensen. He’s absolutely amazing. As it turned out, so was the singer – D.C Cooper. Holy shit…

March was the month when things started to move a bit. Gus G had just released his first solo-album “I Am The Fire” and was kicking off his solo tour with a few shows in Greece with Uli Jon Roth and Jorn Lande – and Mats Levén fronting his own band. I flew down to Thessaloniki which I almost consider as my second home nowadays, met up with my friend Suuded from Germany, and checked out the show.

Had a great time in Greece – as always. Was great to see Gus and the others, we went to this rock bar after the show which is almost a tradition every time he plays in his home town.

The day before the show, we visited Firewind bassman Petros in his bar Emerald – really cool rock pub. He served us the best booze in town, personally. ;)

But the loud music makes it almost impossible to hear what anyone is saying so after maybe 2 hours everybody left to get some well deserved sleep.

A few days later I was on a plane over to Manchester, UK, to check out the Steel Panther show there. That was all I did – for a change. No interviews, no parties, no nothing. Just fly in, see show, fly home.

The week that followed was graced by the super awesome Danish rockers D.A.D! My friend Henny and I made a roadtrip to Gothenburg and had a great time, getting slightly intoxicated at Hard Rock Cafe – and I hit on the Swedish prince, Carl Philip, literally. I wasn’t looking, as usual, and he and his “gorillas” were passing me on the sidewalk where there was a construction area and not much room. I wasn’t looking and thought “why do I always have to be the one who moves??” so I pretty much shoved the prince, when my friend whispered to me who it was. Whoops…

The cool thing was that he went to Hard Rock as well – and ordered a burger that he enjoyed while Zakk Wylde and Black Label Society was playing from the video screens all over the restaurant! The Swedish prince ROCKS! :) And he’s handsome too – for a short haired prince. ;)

In April, I got a message from Iréne on Facebook – she used to sing with female rockers Modesty Blaise, a band I used to manage back in the day, and that was reallyyy a long time ago. We lost touch but reconnected thanks to social media. :)
She invited me to come over to the studio where they were recording a tribute to our old friend Andy Pierce from the band Nasty Idols who passed away last year.

It was so great to see everyone again. Sometimes it’s like time stood still, we all had a great time and Andy’s positive spirit was with us the whole time. 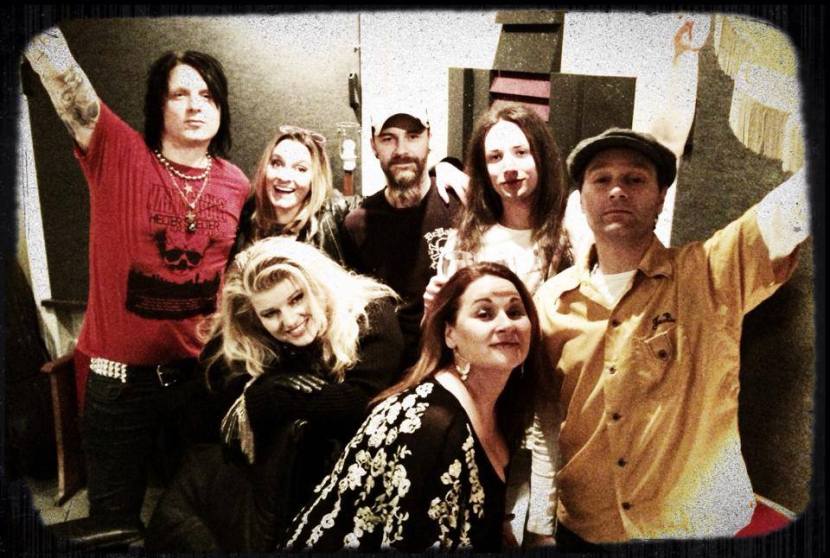 And that takes me to MAY and the months that followed that were super-busy concert- and travelwise! Let me catch my breath a little bit here before continuing to part TWO of 2014, cause there’s a lot – a LOT more where this came from. :D Keep checking!!