The IMPOSSIBLE…. turned out not to be that impossible after all. Time heals a lot – and with time comes wisdom and a different perspective on life, I guess. Maybe even the rock’n’roll legends have realized that they aren’t immortal and that life is too short for pettiness.

Ritchie Blackmore is to reunite with his old bandmates from Deep Purple and Rainbow, and give it another last go next year. I can barely believe it, it’s beyond what anyone thought would EVER happen, it feels almost unreal!

It’s a chance to relive legends in action, to turn back time!

And it hit me – we are the last, privileged generation. We are probably the last ones to see the amazing men and women who created heavy metal, the people who gave us rock”roll.

Black Sabbath – who said they would NEVER play together again, got back together, and now they’re about to embark on their last ever tour, as Tony Iommi doesn’t want to push his luck and risk his health with extensive touring. Black Sabbath invented classic heavy metal.

This is it. You get this one last chance, and they will forever hold their peace. Strange thought, isn’t it? They’ve ALWAYS been there. Like family, or your best friends in the world.

AC/DC:s Brian Johnson said just the other day that it’s time for AC/DC to retire as well. One of the best live bands of all time. We’ve seen the last of them. The time has come to say goodbye. 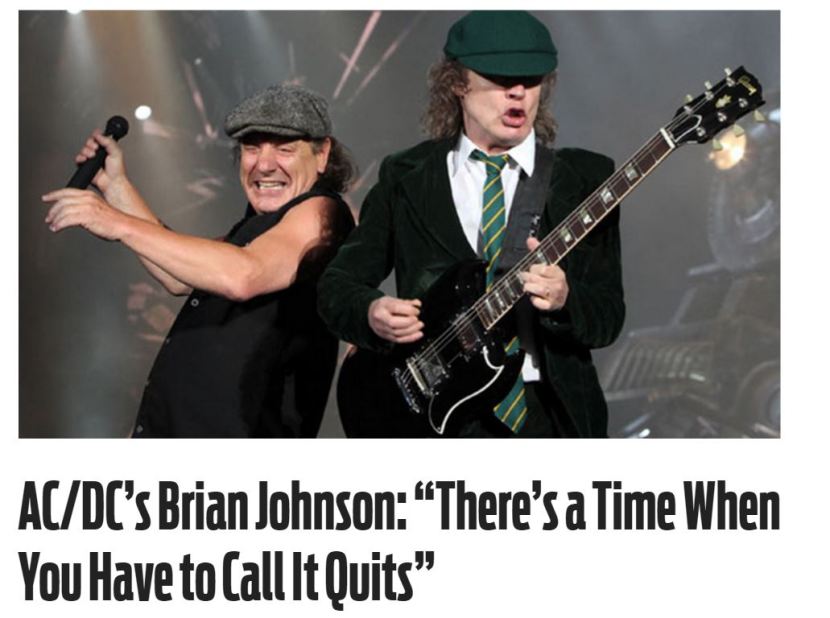 Lemmy is struggling with his health, it may very well be the last time he goes on tour as well, no matter how much of a fighter and a badass he is. There always comes a time when it’s time to say goodbye. Maybe that time is here now.

Some other legends are not calling it quits, but maybe they should, so that people can remember them while they were still half decent, and not as complete disasters. I’m talking about Kiss, Motley Crue, Geoff Tate… bands that used to be on the absolute top, that now are embarrassing themselves and you just wish you hadn’t had to witness their public humiliation.

I consider myself extremely lucky, because I’ve seen most of the legends. I was a teenager during the best years of their career, and I followed them through the decades. Cozy Powell, Judas Priest, Whitesnake, Dio, Iron Maiden, Bon Jovi, Def Leppard, well most of the 70’s and 80’s legends. They wrote the book.

How much longer will they be around? I already see the demise of the legends. They are retiring or moving on to their rock’n’roll heaven & hell, they’ve given us a lifetime of fantastic music, memories and unforgettable concert experiences.

We are the lucky ones, the privileged ones. We were there when they said hello – we will be there when they say goodbye. Ten or twenty years from now, all the bands that we grew up with, will have retired and some of them may have said goodbye for good – in whichever shape or form…

Some may no longer be what they once were, but as long as the heart and passion is there – I will be there to show my support and gratitude, to the very end.

OZZY, I love that man, there’s passion and love in what he does (not so sure about his performances with Sabbath, but as a solo artist, there’s no doubt about it!).

DAVID COVERDALE, amazing frontman, a source of inspiration for millions of people worldwide.

ROB HALFORD, the Metal God – he’s always OWNED his crowd. Never mind the fact that his voice has had its ups and downs live, he is a legend in his own right, I’ll go see Priest for as long as they keep doing their thing!

And all those guys who are about to throw in the towel for good: THANK YOU for sharing your talent, love for music and lives with us! Now go and get that WELL DESERVED REST that you’ve EARNED after a lifetime of hard, amazing work! And smile at your accomplishments. Nobody will ever forget what you’ve created.

I can’t wait to see Blackmore and Joe Lynn Turner back together again. Blackmore and COVERDALE – are you KIDDING? I can just lie down and DIE after that!! Now – can we fast-forward to 2016 please?? :D