I didn’t go to Sweden Rock Festival this year, my “home” that I haven’t missed one single time since the mid 90’s, but this year I had to for personal reasons. I had to go to Croatia to take care of a few things that couldn’t be postponed any longer.

So I’m really glad that I’ll get to experience THIS festival, SKOGSRÖJET instead, cause it’s brand new to me.

Some of my favorite artists and bands are on the bill, so it’s like Christmas! I originally only got myself a ticket because they announced YNGWIE, my guitar hero since I was a teenage rocker. He hasn’t played in Sweden since god knows when, so that was a major treat! Then they announced APOLLO – Sweden’s Tony Martin, the man with the massive voice.

Then came all this other stuff, it’s gonna be a party-weekend to remember! 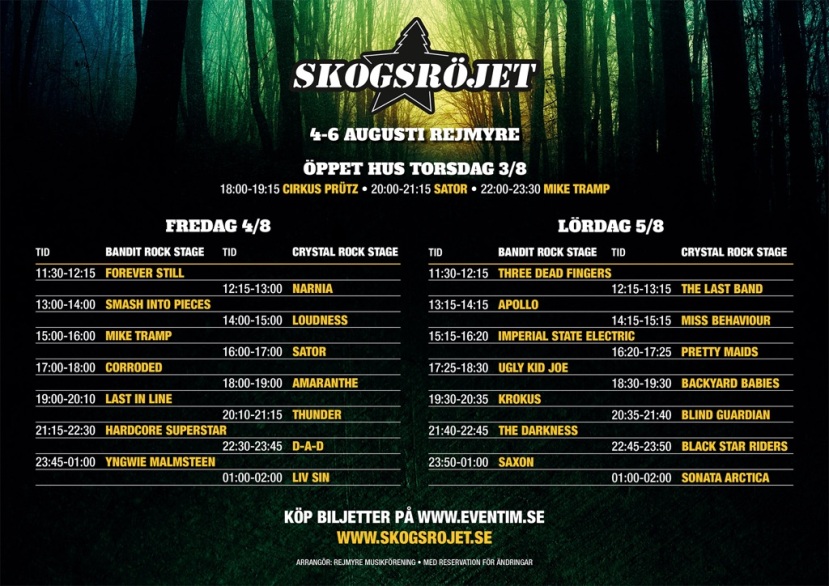 Not only that, but some of these acts bring old friends, Loudness with a long-time friend Anett from the Jon Oliva-days, Apollo from the Firewind and post-Firewind days, Pretty Maids with “little brother” Chris Laney on the keyboards and guitar…

And kickass live acts within their respective fields – THUNDER is an AMAZING band! I first saw them at the Donington Monsters of Rock back in the early 90’s with Iron Maiden, The Almighty, Slayer and W.A.S.P among others. They kicked ass.

Then I made a reaquaintance with them when they played with Whitesnake on their UK tour a few years ago – and then played Sweden Rock Festival. Incredibly solid band, great songs, just a wonderful vibe all the way through. And now they’re back in Sweden – then, if I feel that I STILL haven’t had enough of them, they’ll also be rockin’ the boat at the Monsters of Rock Cruise next year!

[this is from the Whitesnake tour a few years ago]

AMARANTHE kick ass at what they do, they’ve done their own thing from the very start and whether people loved it or hated it, they still carried on with their unique style.
Never mind the fact that all guys go goo-goo-gaa-gaa over Elize, she’s an incredibly talented singer – all three of them are. And there’s fireworks, laser and stuff, enough to feast your ears and eyes. :)

And D-A-D…! There is not a festival, gig, stage, ANYTHING that won’t start rockin’ to the CORE when these guys plug in their guitars and turn everything up to eleven! I love, love, love them to death! It’s genuine, it’s rough, it’s tough, it’s rock’n’roll the way it’s supposed to be, it’s a show, tons of humor and there’s just nothing not to like about these guys, Denmark’s greatest pride and joy!
If you haven’t heard them or seen them, it’s never too late and I can’t imagine anyone not having a fantastic time at their shows! :D

Hardcore Superstar, another one of those solid bands that have so much energy on stage it’s exhausting just watching them. :) It just hit me that a lot of these great acts are all from Gothenburg, Sweden – and Liv Sin is another one to add to that list.

When I first saw Sister Sin, they were opening for some major act, don’t remember who it was, but I remember thinking when I saw that petite, little leather-packaged chick in fishnet stockings: “…probably another one of those wimpy girlie singers that focuses on image and can’t sing for shit“…

Boy did I regret thinking that for even one second! SHE was the real deal – no doubt about it! She had a powerful rock’n’roll voice, like she’s been eating barb wire for breakfast, she was ALL over the fuckin’ place, rockin’ like the 100% pure rock chick that she is!

She’s never disappointed me since – she delivers at every show. Some people were just born to do what they do, and Liv was born to rock the asses of everybody.

And Yngwie – well… he doesn’t need an introduction. Just call him Maestro. :) Nobody comes close, he is simply amazing. Yeah, he’s mister Attitude and all that, but strip away all the bullshit and it comes down to the greatest guitarist I’ve ever heard. There might be others that are technically better, but Yngwie’s got the whole, complete deal – the melodies, she showmanship, the “feel”… It’s a zillion notes per second but it’s not ONLY that, unlike most other shredders. Love the guy. For his playing. I mean listen to this and tell me he’s not fantastic!

APOLLO – you’ll hear his voice on so many records, he’s one of the most sought-after vocalists in the country and there’s no doubt why. Apart from being an impressive singer, he’s also a super nice guy. This clip is from his days with Evil Masquerade. A favorite of mine. :)

PRETTY MAIDS – been around for ages and they’re only getting better!

What’s not to like?! I can’t wait for this weekend, that’ll be my dose of rock’n’roll for this month! :D