The festival of the century. Bucket list fest. Call it whatever you want, but I feel incredibly privileged for having been one of the 75,000 people that attended the Desert Trip festival in Indio, CA on “weekend one” (Oct 7-8-9).

There have been a lot of age-jokes about the festival, which I guess is to be expected when you put all these legends on the same stage three days in a row:

Even Mick Jagger himself made a few age-jokes when he entered the stage the first evening.
It’s funny though, cause I never saw “old men” on that stage.

I saw young guys stuck in the wrong bodies.
Every time I see Keith Richards smile that rascal smile of his, I see a rebel kid that lives inside a wrinkly body, and you see it in his eyes too.
It’s not an old dude. He is just badass, maybe even more now than ever before. He’s earned it.

Being young is not always an advantage. Respect and reverence is something you can enjoy when you’ve invested YEARS into whatever it is you do in life.

There is not a 20-year old on the planet who comes even CLOSE to being as cool as Keith Richards. When you’ve done something your whole life, proving time and time again that you’re not only a survivor, but also a winner and you’ve paid your dues a long time ago, it just puts you in a position that younger musicians can only dream of.

Check out Mick Jagger. Most young guys couldn’t do what he does – he doesn’t stand still for five seconds, he works the biggest stages in the world and he doesn’t even stop to catch his breath. What “old dude” does that? It’s all about the energy that you’re projecting, not the packaging you’re stuck with.

Paul McCartney always had his boyish charm, and he’s always looked like a young man, dispite the inevitable signs of aging. His spirit shines through everything he does and all he is. 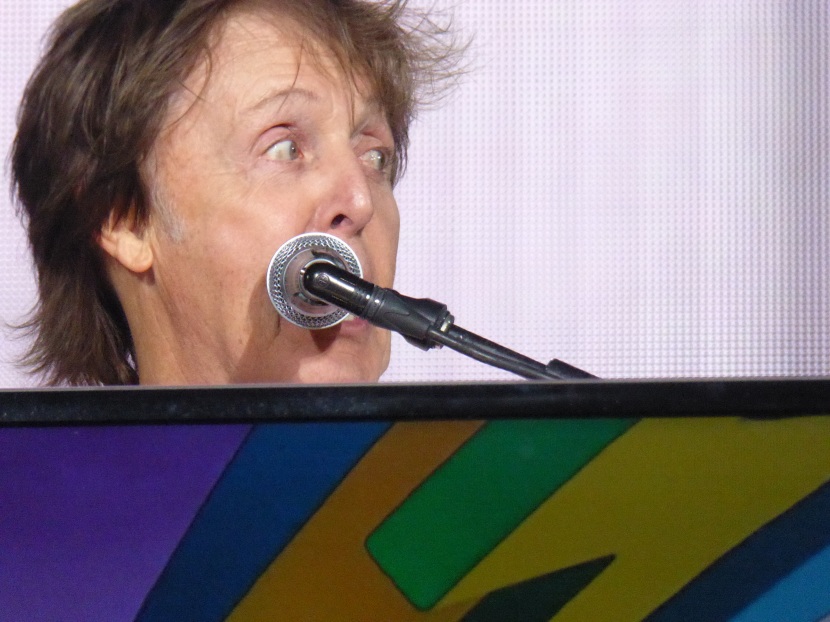 He’s a young boy with a talent that he’s blessed the world with.

When he entered the stage at Desert fest, I wasn’t prepared for my own reaction. I thought I was going to be all smiles and partyyyy during his set. Instead, his very presence made me cry like a baby for almost 2 hours straight! I simply couldn’t stop it. That’s how powerful that experience was.

It was tears of joy and like a “movie” rolling inside my head that took me to different places and emotions throughout my life, that were somehow connected to whatever song he was playing. First love. First heartache. Days in school. Growing up. Life. Friendships. Career. Every single song is strongly connected to something that has touched my heart. I could barely hold on to my camera when he sang “Here Today” (tribute to John Lennon). Just totally lost it there.

That wasn’t a concert. That was a religious experience. And going back to that age thing, I can’t recall ever having one of those super-emotional experiences at any 20-year old’s gig. Not even when I was 20.

Wrote this in a private Facebook update that night:
“I’ve used superlatives about concerts and artists in my life, but that was compared to what I had seen, heard and experienced up until then. THIS was not just on another PLANET, it was a totally different GALAXY. I’ve never seen anything that powerful in my entire life and I’ve seen a lot.

The whole thing just moved me to tears, I was bawling my eyes out while smiling up to my ears all at the same time, because I really didn’t know what else to do with everything that I felt during that show.
I’ll have to process it a little first, but, man… that was just… they would have to come up with another word that’s stronger than “amazing”, “fantastic” or “out of this world”. Paul McCartney in concert – on a stage this size makes EVERYONE ELSE look like freakin AMATEURS!”

The Who… Oh yeah, when you hear Pete Townshend talk to the crowd, it’s easy to tell that he’s still a loud rebel at heart with a whole lotta attitude! And he did slide on the stage on his knees too!!

When Roger Daltrey swings his microphone like a maniac, I suddenly realize who Sebastian Bach got that move from. :)

In short: These guys wrote the book! The book of rock’n’roll. They had something to say, they had visions, they just went ahead and changed the world.
So to me it wasn’t just an “old dude festival”. Far from it.

My closing words in a private post on Facebook that night were:
“I leave the US this time with my mind full of impressions which will take a long time to process, but it was something extraordinary that I’ll remember for the rest of my life“.

There is a LOT more to say and post from the festival, but I just wanted to share some of my first reflections on that age-thing – cause in this case, age is a measure of your coolness.
Cause when you’ve worked yourself up to this level, there is NOBODY that will EVER get close enough to even try kicking your ass! :) And that calls for some respect.

When it was announced, I thought it was a hoax. A festival with names like Rolling Stones, Paul McCartney, Bob Dylan, The Who, Neil Young and Roger Waters. To me, that sounded like the kind of gig you would imagine you could go to when you die and go to heaven one day. Simply too good to be true.

I could barely believe it when it turned out to actually BE true. Holy cow!

Of all the hundreds, maybe thousands of gigs I’ve seen in my life, this surpasses them ALL, even as just an IDEA, never mind the actual FACT and the actual FESTIVAL….!

I’ve seen Rolling Stones, Paul McCartney, Bob Dylan and Roger Daltrey individually, but to have them all in one place is unearthly! :)

I had to try to get a ticket. I realized that the whole world was going to be online at the time the tickets went on sale and there was an imminent risk that I would end up with a crashed webpage or something that said I was number 1,567,901 in line or along those lines.

That particular day, I had to work late, and since I work in Copenhagen and live in Sweden I knew that I wouldn’t make it home on time for the ticket release. The solution was to bring my laptop. I decided to find somewhere to sit at Copenhagen Airport where nobody would bother me, and just be READY….

Copenhagen airport is my second home. I know everything about that airport that a traveler needs to know. :) There is a space right below the Metro-escalators that has a bench with 3 seats that most people never notice. Sure enough, there was only a young guy there, and in the hour that I sat there, nobody else came.

Went to the Desert trip webpage that had this countdown clock, which really got the adrenaline pumping. At the same time I was trying to stay cool and also be prepared for the possibility that I would have to go home empty handed.

The page reloaded and it said I was number 1,945 something in line. My spontaneous reaction was: “Okay, I’m screwed, this isn’t happening…” . 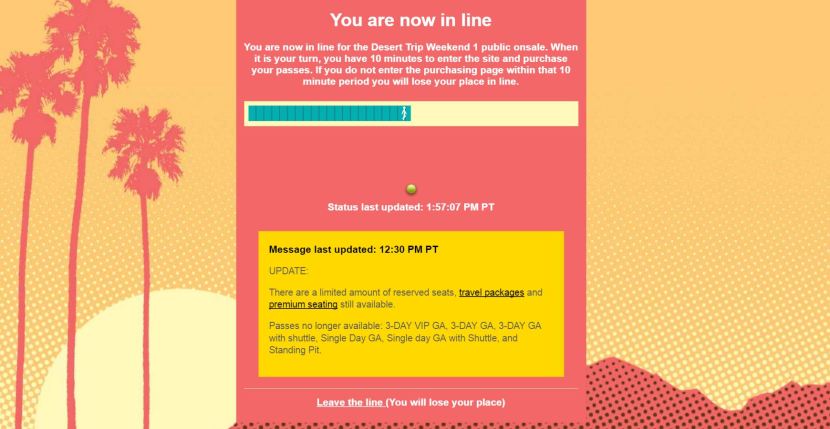 Next thing I know, the thing counted down really, really fast, went to number 500 in line and less than two minutes later I was IN.

I now had 10 minutes to complete my purchase or my place in line would go to somebody else.

I knew what I wanted. Where are the STANDING PIT TICKETS???

A hunch told me to click on page 6 – and there it was!

I had already prepared everything so that it wouldn’t take more time than necessary. Google chrome can save your credit card info, but even if that doesn’t work, I had written it down in the Windows word pad, so all I would have to do was cut and paste. Bam – bam and bam!

Before I knew it, I was a proud owner of a ticket to the Desert trip festival!

Honestly… I was staring at the screen thinking: “What? Really? That was it? I’ve got a ticket now?”

I still can’t quite believe it!

But yes, best seats in the “house”. I thought everybody had the same easy experience as me but when I checked online I saw lots of angry and disappointed people who said that they had waited for hours in the virtual line, only to find out that it was sold out. From what I’ve heard, and I’m not sure if the figures are correct, about 100,000 tickets were sold out in 5 hours. For both weekends – cause they announced an extra weekend due to the extreme demand. All gone.

I’m not surprised. And I feel incredibly blessed and thankful for being one of the lucky ones who will get to experience this.

It’s the most expensive thing I’ve ever done, right after the Monsters of Rock cruise, but thatyou could pay in installments, choose a payment plan. Here, you had to pay straight up.

Which means, no traveling and no gigs for me until after October. All the plans I had have been cancelled because I have to reek in some extra cash for this.

However, it will all be worth it and Im beyond excited! I’ve always been a Beatles fan, since as long as I can remember, so seeing sir Paul again will be MY treat. :) I love the Stones as a live act, that will be icing on the cake.

And the trip itself, I love it! I had actually booked hotel and rental car BEFORE tickets went on sale. Figured it would be easy to cancel if I didn’t get a ticket to the festival. Also, prices AFTER the tickets were sold out, would be through the roof, so I’m glad that I planned ahead.

Got in touch with a lady on Facebook that will be travelling from Peru to the festival and her and her company wanted to share the rental car with me – so we cut the costs and it’s a lot more fun to get to know new people as well!

This will be fantastic, I can’t wait!!