I spent almost two full days just clicking my way through Steel Panther history. I wasn’t really looking for anything to begin with, but as I started finding stuff, one interesting fact lead to another and it became an obsession…!

I mentioned to my friend Mari that many people have found my blog by searching for terms like “Lexxi without wig” or “Steel panther no wigs” or “Does Satchel wear a wig?“.

I can’t believe they haven’t already found all this stuff! Her only response was: “Most people don’t have the patience for that sort of thing. It’s the journalist in you that comes out“. Maybe.
I truly get a kick from this stuff. Who ARE these guys?

It’s like Kiss back in the day – everybody wanted to know what they looked like before 1983. The mystery would drive people crazy.
Well, since the Steel Panther-guys are basically always in character during their interviews, you won’t get anything out of them. So if you want to know what lies behind the wigs, the spandex and the jokes, you’ve got to find out for yourself.

I’ve visited some pretty godforsaken, forgotten places on the Internet Graveyard today.
MySpace proved to be an underrated museum of interesting stuff. There were old blogs from 2004 that invited fans of The Thornbirds (also named The Ducks) to gigs for free or to five or ten bucks at the door. Little did they know, I’m sure, that tickets to their future band Steel Panther would go for 40 bucks a piece in the UK eight years later.

There were all these old home-made homepages that people used to create before there was any social media out there – even before the days of MySpace or Facebook. It’s been an interesting journey today! I still don’t have ALL the pieces of the puzzle, lots of things I still don’t get. Like whether or not there is an affinity between the band’s manager Glen Parrish and Russ Parrish (aka Satchel).

They sure look a lot alike if you compare photos – it’s the same jawline. Just speculating – I don’t know, but I’m sure there are people out there who DO know. I just haven’t stumbled upon anything yet that would confirm it, so I’ll just save that for another rainy day. :-)

So….. This is not even half of it, but who knows, maybe there will be a “Part two” in the future. For now, if you ever wondered what Steel Panther looks like “incognito” – here you go!
Still very cool guys -wigs or no wigs!

This is what they looked like then this whole thing began….

MIX OF PIX – click your way through them all – live pix of Satchel’s and Stix’ former band The Thornbirds and more. This first pic is of Travis and Russ (Lexxi and Satchel):

See the full gallery on Posterous

There was plenty of info on Satchel’s musical past, in the form of videos and old interviews, yet he is the only one I haven’t found on any social media sites. So, if you’re digging for personal stuff on him, good luck – it’s not exactly under your nose if you’re looking for it.
Seems like he really prefers his privacy when he’s offstage, respect to that.
But if you’re curious of his “old sins” music wise – here’s some old shit for you to enjoy…! :-)

Notice at 0.49 where Lexxi’s future “hair flip” probably originates from! ;)
This also includes Billy Sheehanwalking out on stage with a birthday-PIE. :-) Great stuff, I LOVE Paul Gilbert!!

And there’s the HOT dude Russ in FIGHT – too pretty to fit in really. :-) 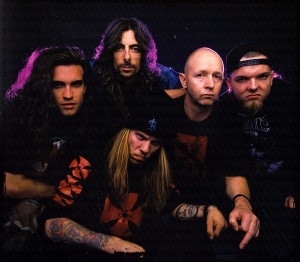 And last but not least…. just a few interesting links – I wish I had saved all of those I discovered today, but like I said – maybe in a part two. :)