One of my best friends sent me a short message on Facebook that just stated: “Andy Pierce is dead!”

I just looked at it, wondering what she meant, was that some sort of joke or a new album or what?! It simply didn’t occur to me that he could actually be gone. But two seconds later, another friend of mine sent me the exact same message. “Did you hear the news about Andy?”

The Andy they were talking about was Andy Pierce, lead singer of the Swedish sleaze-band Nasty Idols. A guy I’ve known since 1987 when they played their very first gig. I actually didn’t know it was their first gig until 20 years later when he told me that it was. Their performance there was so professional that I thought they were big stars already. What did I know, I was 18 and they blew me away.

That was where it all started. The story is too long – I’ve been friends with these guys ever since. For 26 years we’ve somehow “followed” eachother – they started out at the same time as me. I got my first job as a rock reporter in 1988, they released their first album around that time as well. I’ve written countless Nasty Idols-articles and reviews, seen numerous Nasty-shows…

And I was really glad that they agreed to perform on my private birthday party a few years ago, when they really weren’t playing anywhere else at the time. A promoter tried to book them after that gig and they turned down the offer. When asked howcome they played at MY event, Andy answered: “Because it’s HER!”.
That says it all I guess. It counts for something to have known someone for that long.

[Andy watching one of the other bands that played at my birthday party, Chains. He spent all day there watching the preparations, trying to be an invisible fly on the wall – which he never really was. :)] 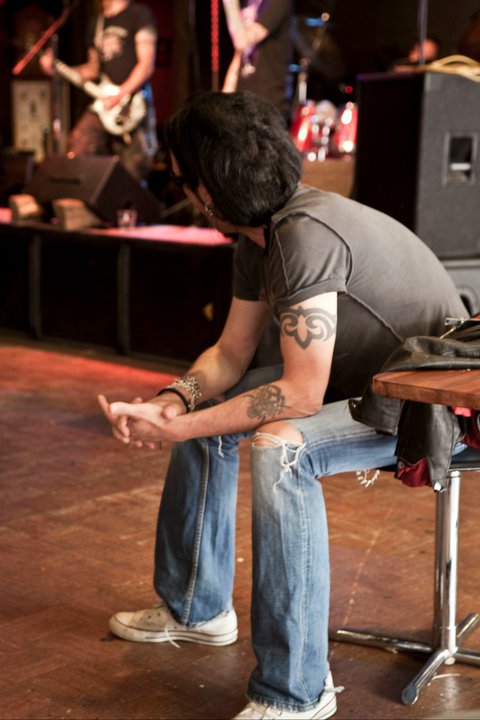 I’ve got so many memories flashing through my head right now. I could go on forever about Nasty Idols, but for now I’m really just remembering Andy as a person.

When someone passes, everybody paints up this picture of a perfect, angel-like person. Andy wasn’t perfect. Far from it. He had his issues, spent time in jail, lived the life of a rock star with the drugs and booze and that whole deal.

But that was not his only identity, and that’s definitely not the guy I remember. I remember him as a guy who played two roles – one of those being the rock star everybody expected him to be. There was a line in one of the lyrics (48 Hours) on the album “Boys town” – “I’m standing in the bar, playing the role of a rock’n’roll star”…

He would surround himself with “sleaze chicks” but the minute they turned their back he would shake his head and go: “They look trashy, what’s with those fishnets with big holes everywhere?”  He definitely was 2 people in one body.

He was crazy funny too – a wonderful sense of humor. Anyone who ever met him could tell you that.
At a Christmas party at my place, he made my guests laugh so hard that they totally lost their breath. One of the guests had cancer at the time and he told her that she was strong and beautiful – just exactly when she needed to hear that. And she was so grateful that he got her to forget about her disease all evening, the laughs were the best medicine she could get.

In essence, he was a traditional guy, who was scared to die. He drove like an old lady and talked about living in the country with a garden and all, but he couldn’t really set himself free from the image of himself that he had created. And he never would even if he could. That image and the admiration that he got from people, was like a drug. It was his identity, or the one he wanted the general public to see.

I sometimes thought that he had created a monster – the monster that was Andy Pierce and everything that went with it. Then again, he loved music and art and had an unmistakable talent and taste for good melodies, cool artwork and anything visual. It was all an important part of the package that he and bassplayer Dick Qwarfort, who worked in advertising, created under the name Nasty Idols.

When Andy went solo in the 90s, he tried to do the pop/rock-thing for a short while, and I asked him to reunite Nasty Idols for my club at the time – Hard Break. They played at the premiere and it was a success. It made them realize how much they missed playing together and next thing you know, they were back on track.

They helped me get people to the club on the premiere, I helped them with a comeback when nobody was interested in booking “that kind” of band. And that’s how it was.

This is from that Hard Break premiere – Nasty Idols clips from that night in the beginning and towards the end of the video.

He would get thrown out of the house by his girlfriend sometimes and end up throwing pebbles at my balcony window at 4 am, asking if he could crash on my couch cause he had nowhere else to go.

He stopped doing that after an evening out with a few friends when he and a few people came over here in the middle of the night, being drunk and annoying and I literally threw him out. He thought I was kidding, I remember he was still standing on the other side of the door in the stairwell thinking that I would open it and let him back in. When I didn’t he left and we didn’t talk for a while.
I wasn’t drinking at the time and he was out of control, I didn’t hate him or anything, it was just better to be friends in public spaces where my stuff wouldn’t get trashed. :) He calmed down considerably a few years later.

His problem with alcohol was no secret to anyone. When I did an interview for Sweden Rock when “Boys town” was about to be released, he got so nervous that he got himself piss drunk and had to be escorted home by Dick who was used to handing the situation… Luckily he lived just across the street.

Regardless all this – most of us loved Andy. He was funny, an incredibly charismatic and cool guy, a lot more intelligent than people gave him credit for – because he liked playing the role of the stupid sleaze-star…

As much as we would laugh at his antics, I admired him for what he had accomplished and for his talent as the perfect frontman. And he was a good friend, when he wasn’t being taken over by Demon Alcohol or whatever other shit he would end up taking – I don’t even know why he insisted on doing that, but my guess is that he was way to insecure to do without it.

I am really really sad today. He was a good friend and I will miss him a lot. He left way too early, but in true rock’n’roll spirit, he will always be remembered as the young and wild rocker – just the way he would have wanted it.