If you’re a rocker and you live in Europe – you might already have planned to attend one of the many summer rock festivals. It’s become a tradition.

I started going in 1993. I think my very first rock festival was the Danish Midtfyn festival. Lots of great bands: Mr Big, Whitesnake, Therapy, Jimmy Barnes, 4 Non Blondes, Sass Jordan, Johnny Cash…. It was great, I spent half my time writing articles and reviews in the press area, and the other half at press conferences or checking out bands. But what I remember the most about that festival, is why I chose to never ever stay in a TENT at a festival….EVER.

I barely slept a wink in three days. People were loud and drunk – and tents aren’t soundproof… The Germans next to us kept singing their German drinking-songs, and the more they drank – the louder their “singing” became. After ALL these years, I still remember the song they kept singing, over and over: “Jawohl, jawohl, jaaaah-woooohl, wir lieben Alkohol, wir haben keine Wasser so wir trinken Alkohol – jawohl jawohl….“. Probably way off with the spelling but you get the general idea… :)

Personally, I never drink at festivals. There are a few reasons for that.

1. Music is my drug. Nothing makes me feel better than that. As nerdy as that sounds. :)
2. If I want to stand in the front row, I can’t leave it just cause I need to pee. I only drink a little bit of water, just what’s absolutely necessary, so that I sweat it out rather than having to stand in line for the yucky toilets.
3. Since I don’t live in a tent, I usually drive to a hotel, a friend’s house or home after the evening’s last band. No drinking & driving.
4. It’s tough in the front row – I need my strength to fight off assholes, can’t make myself drunk and powerless in those situations.
5. I’m just simply a music nerd who prefers to get drunk elsewhere, not at a festival :)

I’m one of those who plans which bands I’m gonna see months ahead, I create my own personal schedule and print it, I already have it all planned, how to get from stage A to stage B (to stage C and to stage D….). I know if it’s a band where I absolutely NEED to be front row (requires a few hours extra to make sure) or if it’s a band that I’ll only watch a few songs of from afar before heading off to see another show.

All those logistics are already planned pretty much into detail when I get to the festival area. The only thing that ISN’T planned, is how to fit in the press conferences, cause usually those are subject to change or improvisation. 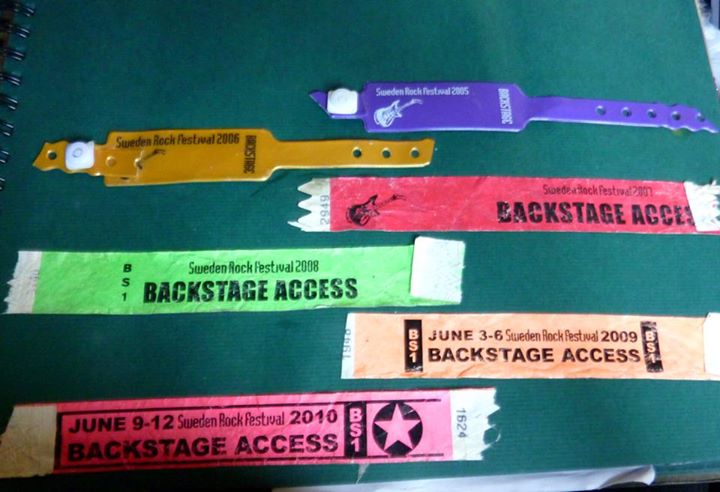 A festival to me – is ALL about the MUSIC. I forget to eat and drink sometimes. I don’t care what others are planning to do there, I have my plan, and if it fits theirs – perfect! :) If not – I’ll see you somewhere out there or after the show. But nothing is going to change my band schedule. Unless the band totally sucks of course.

I make sure I sleep in a REAL bed after a long day of walking around in a dusty field, I make sure I get a nice shower and a real breakfast before heading off to the next day’s festival.

Since Sweden Rock started, I’ve only missed it ONCE, and that was because I was living in the States. Other than that, nothing has ever stopped me.

Last year was pretty horrible and I most likely wouldn’t have gone if I hadn’t felt that I HAD to because I had a friend visiting me who came for the festival. My father had passed away only a few days before, I was still in shock, I remember just walking around there like in a dream, it was all so unreal. All these happy people, all the things I loved so much, but the one person that I loved more than anything in the world, my dad, was gone. Just like that. To this day I can’t believe I managed to review a few bands in that state. :-/

Today I’m glad that I forced myself to go. I somehow got right back in the saddle, I had no time to drown in my own grief, I turned it around, and the festival became a part of the healing process in some strange way.

It’s like a home. Sweden Rock to me, is HOME. All the things I love are right there. Far away from the “real world”, 24/7 pure, concentrated rock’n’roll, that live concert energy that can’t be explained unless you’ve experienced it, all those people who are “my kind” – who are there for basically the same reason… Thousands of people with the same love for rock’n’roll. Friends I only see once a year, at the festival. The whole atmosphere that charges my batteries like nothing else. 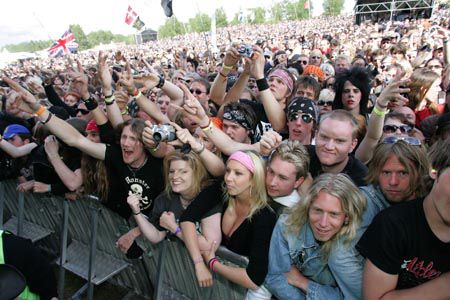 All those things are enough to make me feel high. The last place on earth where I would ever need alcohol, is at a festival. I’m already so high on everything else, that it would just be a waste of money.

I spoke to  guy who was shocked to hear that I didn’t drink and “party” at festivals. He spent a week at Roskilde festival last year… and only saw 2 bands. I’m not quite sure what he did with his time, but he mentioned something about weed, getting high, getting drunk, throwing up, passing out, drifting around the area…. And he was happy doing that. He called it “festival life” and that was HIS idea of a good festival. Fair enough. He’s not the only one.

What festival-type are YOU? And which festival is your favorite?